In the previous episode, Jeff finally takes the journey to acceptance in spite of the harsh reality around him. But now he has to deal with the fallout from episodes five and six of the season. With that said, let’s see how it all works out. 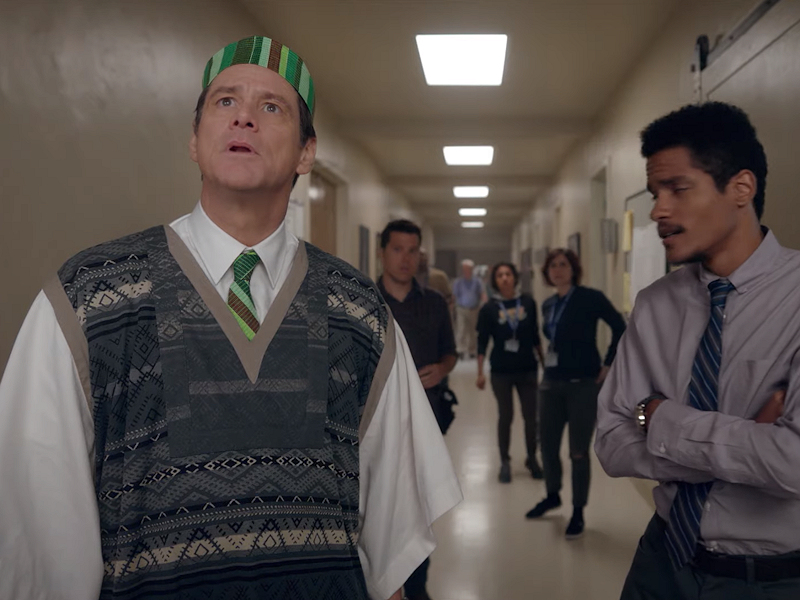 The episode opens in 1986 during the day of the Challenger explosion. On that day, a college-age Jeff tells his sister Deirdre he wants to use the power of television to do some good for the children. Cut to present day, Jeff returns to the studio to tape different versions of his show at once as the different Pickles nationalities to replace the local hosts as seen in the sixth episode. He then finds a drunken Peter laying on Mr. Bigfoot’s hand while drinking beer despite warnings not to drink that much with his new liver.

It turns out Jill didn’t say yes to Peter’s proposal because she doesn’t feel ready. Jeff tells her that she has to say yes so that she can move on. Meanwhile, Will clearly still upset from the funeral goes to his grandpa about his belief in time travel only to be blocked because Seb was busy with something. As Jeff calls up the Croatian an offer to be his country’s Pickles host, he gets a threatening phone call from an angry parent.

The episode then shifts back to earlier in the day when Deirdre was watching his brother filming when a commercial on her office TV is Astro-Otter in a car commercial with Blake Griffin. Very angry about it, she tries to set up good PR for her show by getting the life-size puppet to go up an actual spaceship. Later, she confronts Scott demanding having Astro-Otter though he remains unmoved by her threat.

Another shift back in time allows us to see Seb with his date from the previous episode once again hallucinating as the face of his ex-wife but is actually a gay man who’s into him. They were making out when Seb gets a visit from Will, and we see the conversation again from a different angle.


One more shift takes us back to the Challenger explosion, where Deirdre was hoping to move to Japan for a new degree. Instead, she creates the Astro-Otter character and discusses with Jeff what the character should be including voice and gender. Cutting back to present day, she takes her daughter’s ax and threatens her ex-husband with it unless she can have her creation back. However, she’s interrupted with information about the toy company shutting down the Wi-Fi toy due to public concern.

Lastly, Jill has her discussion with Peter over the proposal being too soon. She then proposes to him that she’ll say yes when she feels the time is right. Then Jeff tries to save his ex-wife’s home by switching the numbers of her place with his once temporary home next door. Just in time, a girls-scout leader with a grudge with him takes one of the pickle jars full of gasoline and threw it at the wrong house.

The episode ends with Will seeing the switched number of his house suddenly being the sign he was looking for. His belief in time travel is back although considering what we’re seeing in next week’s season finale, we can’t be sure if it’ll work well for him.