George Lange is a photographer. He's not just any old photographer though, in an industry crawling with photogs he's one of the best. With a portfolio crammed full of Hollywood's finest, political greats and media darlings he's up there with the most successful.

Back in 1994 he was fortunate enough to add Jim Carrey to his list of clients and since then has done several sessions with him.

In an article written by George Lange he describes those meetings. Photos can be seen in JCO Gallery.

My first shooting with Jim Carrey was a twenty minute shooting for Newsweek on 7/12/94. I gave Jim a green roll of seamless and let him improvise with little coaching. Every frame became a new invention, tearing, hiding, folding...

The second shooting was a cover for Newsweek that I shot in Atlanta on June 4, 1995. Jim Carrey was tired from a grueling shooting schedule, and his film success was really beginning to kick into high gear. It was his incredibly loose and animated face that everyone wanted a picture of. Jim Carrey knew his face was the money shot, and he wasn’t giving it up without making me work for it. We went through many different poses before I strapped on the long lens and moved in for the kill.

My third shooting with Jim Carrey was for the cover of Esquire. It was shot here in Santa Monica at Main Street Studios. 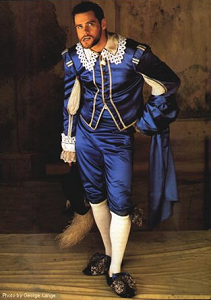 This shooting was proceeded by an edict from Jim Carrey that he wanted to appear as Blue Boy, so we scrambled for a Blue Boy costume, as well as a whole rack of clothes that Esquire thought were more appropriate for their magazine. Jim participates in the "Make-A-Wish" program, which grants a favorite wish to seriously ill children. One child’s wish was to meet Jim Carrey and so he and his family were invited to the shooting. Jim immediately warmed up, signing autographs, hanging out - making everyone feel great. The child was inspiring everyone, so I put him behind the camera to shoot a roll. Jim looked at him seriously from the set and said, "If you are going to take my picture, you have to direct me." The room got silent, the boy was nervous...him directing Jim Carrey??? He brought his eye down to the viewfinder, put his finger on the shutter, then looked up and screamed, "Give it to me Jimmy!!!" Carrey as well as the rest of the room collapsed in laughter, and for the rest of the afternoon we were just bouncing off the walls.

Spitting milk dressed in a silk Versace robe. Going from Blue Boy squire to ....the dressing room where Jim was stretching his skin in the mirror and talking about what he might look like with a face lift.

He asked for some clothes pins - and for a moment (it was painful!) I took what I consider the most memorable shot of all - the cover shot with the clothes pins. It became a controversial cover, and it grew out of the most innocent experiment. I love when the shootings are experiments in improvisation. When the picture is approached as a collaboration of all the chefs - hair & make-up, stylists, editors, photo assistants, all the diferent lights and backgrounds - then I can really play with the subject to create pictures. Going into a shooting, I never know what the final shot will look like. With a subject like Jim Carrey, leaving room for the picture to find its own shape allows for wonderful surprises. 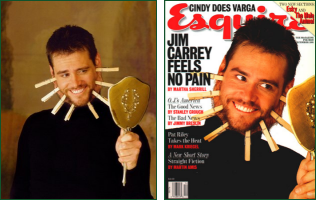 USA Weekend Magazine, spring 2003. Article "Jim Carrey: Defying the Laws of Comedy" For 40-something superstar Jim Carrey, Rule 1 is: Never let them see the real you. Rule 2: Grow up! It's time to forget Rule 1. The first photo got the Honorable Mention at 'The Best of Photojournalism' in 2004.

All promotional photos for Jim Carrey's "Bruce Almighty" in 2003. Blockbuster of the summer and still Jim's most successful movie in his career.