Loosely based on the classic children’s book by Richard and Florence Atwater, Jim Carrey’s latest flick, Mr. Popper's Penguins, is the perfect family film. While its trailers may look cheesy, both parents and children alike will be surprisingly taken by the (very) funny film.

Those who remember the book the movie is based on will notice quite a few differences with the script penned by Sean Anders, John Morris and Jared Stern. Mr. Popper (Jim Carrey) is no longer a poor house painter who dreams of traveling the world; he is now a divorced, driven real estate developer whose father traveled the globe and frequently left him alone with his mother as a young child. When Popper learns that his estranged father has passed away, he shows little reaction to the horrible news. Life simply goes on as usual, until a package arrives from his recently deceased dad containing one last “souvenir” from Antarctica to remember him by: a Gentoo penguin. 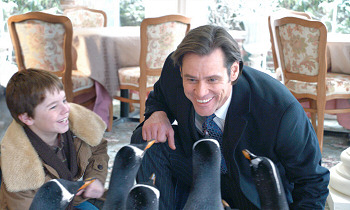 
While at first Popper thinks the penguin is simply a stuffed animal, after the bird thaws out he quickly discovers that it’s real. Desperate to get rid of it, he has his assistant Pippi (played perfectly by No Strings Attached’s Ophelia Lovibond) call everyone she can think of to help him solve his “pest problem.” When no one is able to help, he decides to call the original sender in Antarctica to ask for a crate to ship the bird back in. Instead, a crate shows up at Popper’s front door with five more penguins in it.

Before Popper has time to react to the miscommunication, his ex-wife Amanda (Carla Gugino) comes over for a visit with their two kids, Janie (Madeline Carroll) and Billy (Maxwell Perry Cotton), to celebrate Billy’s birthday. Of course, young Billy mistakes the penguins for his birthday gift and before Popper knows it, he’s promising that he won’t get rid of them. Naturally, the birds turn his life upside down, but—as Popper soon discovers—that’s not completely a bad thing. The birds suddenly make dear ol’ dad cool again in his kids’ eyes and help reignite the spark between Popper and Amanda.

Although Mr. Popper’s Penguins may have its fair share of cheesy scenes, overall the movie is actually quite funny. The film features plenty of laugh-out-loud moments, most courtesy of Carrey’s adorable winged costars (especially Loudy). The cast of Gentoo penguins truly steals the show, and it’s hard not to be entertained by them. Occasionally Carrey gets in a few memorable one-liners as well, like thinking the term “BFF” means “Best Fat Friend” when trying to connect with his teenage daughter. However, while Carrey may not be the funniest star in the movie (for once), he still delivers a fine performance, as audiences really get to see his character’s cold heart melt throughout the film. 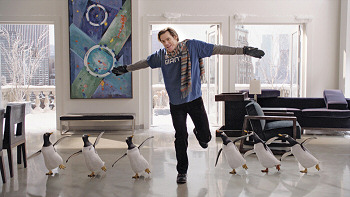 
Carrey’s cast of human costars (which includes the always wonderful Angela Lansbury in her first full-length feature film in six years) also does a fine job, although for the most part none of them are really given much to work with: Mr. Popper’s Penguins is truly Carrey and the penguins’ movie. That being said, Ophelia Lovibond does manage to steal the spotlight in the few scenes she’s in as Mr. Popper’s personal assistant, who somehow manages to make sure that almost every word she speaks starts with the letter “P.” Lovibond says some real tongue twisters throughout the film and delivers them with such ease that it’s impossible not to be impressed with her performance.

In addition to plenty of laughs, Mr. Popper’s Penguins also has a lot of heart. Don’t be surprised if you find yourself getting a little teary-eyed over the lead penguin’s performance—viewers will truly be able to understand what Captain is feeling at all times. Granted some visual effects were used to assist the penguins with their “acting skills,” but audiences will still feel for Captain (and her CG counterpart) whenever she has “flight envy” watching other birds fly. 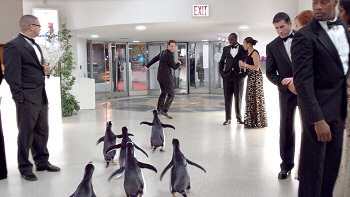 
While Mr. Popper’s Penguins will most likely be overshadowed at the box office this weekend by Green Lantern’s highly anticipated release, here’s to hoping that Carrey and his cute feathered costars don’t get lost in the summer movie shuffle (especially with Cars 2 racing into theaters next week). The movie is truly one of the best live-action family films to come out of Hollywood in a while, and it would be a shame to see it flop. Although it may not be a completely faithful adaptation of the beloved book it’s based on, Sean Anders, John Morris and Jared Stern’s modern-day retelling of the classic children’s tale would have made Richard and Florence Atwater proud.