Once the interview begins, Jim references some of the recent sporting events including the Dallas Mavericks winning the NBA Finals and the Boston Bruins finally winning the Stanley Cup after 39 years. He mentions that he feels bad for LeBron James not getting any good publicity, but says that he’s proud to be Canadian and roots for both teams in the Stanley Cup Finals. 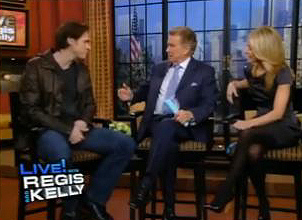 After the commercial break, Jim starts talking about working on his new movie where he worked with the penguins in a thirty degree set before the worst snowstorm in New York City occurred. He also mentions his history of working with animals on screen including one time during the filming of Lemony Snicket that he was checking out the snakes and almost got bit by a cobra.

Before they showed the clip, Jim shows off his iPhone with different pictures of his eyes and mouth and place them directly anywhere on his face in such a funny way.