Jim Carrey's MTV Movie Awards appearances have always been memorable, and this year wasn't an exception! He was onstage in a "cutting-edge" green-screen suit and delivered a deadpan introduction of the band Foo Fighters. Audience and viewers saw images projected onto the digital canvas of his clothes. The images were of wolves, water, rocks, clouds and two bulldogs humping. 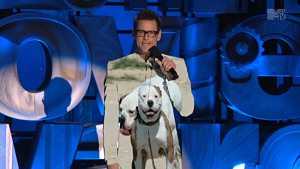 A funny appearance by Jim Carrey. We have added lots of pictures in the Gallery, you can check MTV Movie Awards Pics and many Red Carpets Pics. Below you can see Jim Carrey's appearance and an interview with Jim Carrey after the show.