After much speculation and many tweets about his love of the wee feathered critters, Jim Carrey has finally signed up to play the lead in 20th Century Fox's, "Mr. Poppers Penguins". In June, we reported that Carrey was showing interest in the project.

The film is based on the 1938 book by Richard and Florence Atwater, which revolves around a humble house painter who receives a penguin in the mail from Admiral Drake's voyage to Antarctica. When the one penguin turns into 12, Popper decides to turn his penguins into performers so he can continue to feed and house them.

This new film adaptation of the book will center on “a high-powered businessman (Jim) who suddenly inherits six penguins. As he gets acquainted with and increasingly attached to his new charges, his life quickly unravels as his swanky apartmentt is turned into a snowy winter wonderland, the deal he’s long been working on is derailed, and he almost lands in jail.

The movie, which will feature live-action and CG elements, is to be directed by Mark Waters (Mean Girls, The Spiderwick Chronicles), scripted by Jared Stern (Bolt) and produced by Davis Entertainment. It is slated to start filming in the Fall with a 2012 release. 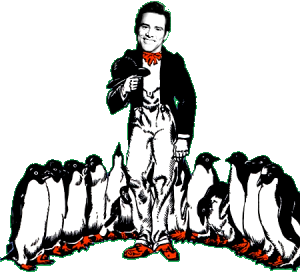