Yesterday on April 24th, Jim Carrey performed in Conan O'Brien's comedy tour - "The Legally Prohibited from Being Funny on Television Tour", held at a sold-out Gibson Amphitheatre in LA. The title of the tour is a reference to the Tonight Show host and timeslot conflict which resulted in O'Brien resigning from his position as host of The Tonight Show earlier this year. 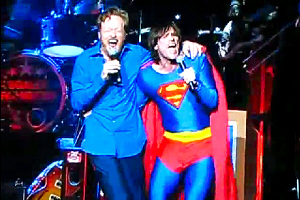 While Conan O'Brien was singing Jim Carrey made a surprise entry in a Superman suit singing duet of "It's Not Easy to be Me." The crowd roared and gave them a standing ovation. Everyone cheered when Jim and Conan sang on a very high note giving funny gestures with their hands.

Jim Carrey also mentioned on his twitter about how much he enjoyed performing with Conan at his comedy tour.

You can watch a clip of Jim Carrey's part here: