Over the past couple of years Jim Carrey has begun to reveal a deeper spiritual side and on Thursday June 4th, he shared the spotlight with Eckhart Tolle (Author of 'A New Earth' and 'The Power of Now') and other speakers at the first meeting of the Global Alliance for Transformational Entertainment (GATE) in LA.

Jim and spiritual teacher Eckhart Tolle headlined the three-hour session at an auditorium, on the Fox lot in Century City. Along with singer Melissa Etheridge and several other speakers, they urged their colleagues in film, television, music and other media to use their work for the good of mankind, to influence positive and spiritual change on society. 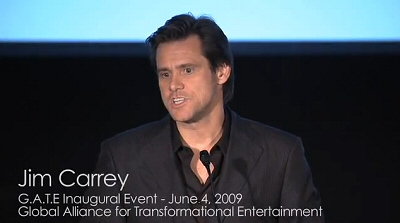 GATE founder John Raatz described the goal as an "up-levelling of consciousness" a sentiment backed by HBO executive Scott Carlin who told the gathering, which included Garry Shandling, Billy Zane and Jackson Browne, "that audiences were yearning for the sense of being nourished deeply.”

The highly influential Tolle then discussed how most of humanity is captive to the mind and obsessive thinking patterns that can be broken, through meditation and other techniques and that modern mediums can reach out to the masses. Praising GATEs intentions, he revealed that he had already found transcendent moments, ones that could help people “get out of the box of their minds,” in films such as “Groundhog Day,” “Titanic,” “The Horse Whisperer” and “American Beauty”.

"Yes", Tolle said," film can raise consciousness, if only for a moment."

When Jim's opportunity to take the stage came he reverted to type for a moment and 'satirized his nascent guru role.' Casting a 'beatific gaze on the audience,' delivering the message: “I’m Jim Carrey and I’ve come to free the world from sin.” Referring to his childhood experiences, Jim revealed how his epiphany came when he learned not to fixate on thoughts, “heaven” can be found all around, by living in the present moment.

After making that breakthrough, Jim decided, “I want to take as many people with me as I can.”