Of all Jim Carrey's characters, one of the most memorable is Andy Kaufman from the movie "Man on the Moon".

More than portraying a very known comedian in the movie that tells the story of his life, Jim became Andy Kaufman. Both Jim himself and his colleagues felt it. Now, 18 years after, Jim will be premiering in two festivals, the documentary that opens the veil to Jim's process of becoming Andy Kaufman.

"Offbeat documentarian Chris Smith provides a behind-the-scenes look at how Jim Carrey adopted the persona of idiosyncratic comedian Andy Kaufman on the set of Man on the Moon." 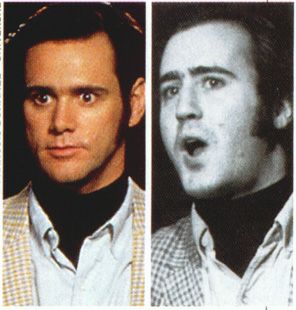 The doc will premiere at the Venice Film Festival, that will happen from August 30rd to September 9th. It has also been announced, it will screen at the Toronto Film Festival too, from September 7th to 17th.

Neither film festivals have a date yet for the screening.

We are so excited to see this behind of a scenes and we will keep you updated as more news come.

-- Sources: Venice Film Festival and Toronto Film Festival. With thanks to indy-jones. Click to comment this article.