The show begins with our Jimmy coming on in a Mask, in what can best be described as a 'Phantom of the Opera Special', no masking it's the handsome boy himself though, looks as smoking as ever in this black suit (his best look). Of course there is an explanation for Jim Carrey's Mask stunt, he tells Jay Leno he's out there dating and wants to make sure he's wanted for him and not his fame, money, or (tongue in cheek James) not for anything we have heard about him sexually, (all female fan base), "yes we have heard Jimmy". Dr. James Carrey then gives us a few pointers on male/female relationships and a fabulous funny role play piece with Jay Leno and Jim as lovers before Jim takes off the Mask and reveals his gorgeous face.

Jay then reveals the front cover of 'Entertainment Weekly', where there were some controversies that Jim may have had plastic surgery. This gives Jim the baton to take the piss out of plastic surgery, always a great subject for him as he's hilarious at it and we get his classic faces thrown in too. Jim also responds to how fit and well he's looking with a crack at his film "The Majestic" (not loved by all his fan base, guessing the guys, for females it's on 24 hour loop) 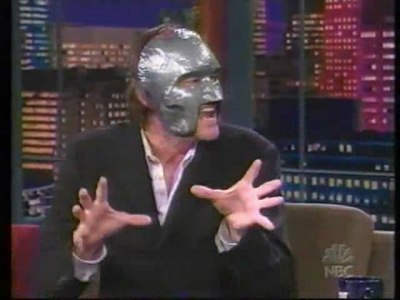 Jim then gets down to promoting his brilliant film "Bruce Almighty" and a love worship for the man himself, Morgan Freeman in the form of song. He's then asked what he would do if he was God,..."shorten his penis and be like normal folk". We then have a brilliant reenactment of a scene from "Bruce Almighty" with a funny twist whilst aloft Jay's desk. Jim then goes on to tell us about a new digital camera he's playing with and shows us some funny pics taken while flat out at the Dentist and shots of the paparazzi who are constantly on his back, he has one photographic piece of them he calls, "get a life you )(*)(&)(ing losers" and he delivers the line brilliantly.

After the break the show begins with the beautiful Amanda Bynes and her background story and Jay reminding her she sent him an audition tape when she was about 7, we then get to see a cute VT of Amanda singing to Jay.

Whilst Amanda is being interviewed we have quips from Jim occasionally, he's so cheeky with pretty girls, when she says she was a fan of his he asks her "What kind of fan". Jim also takes the Mickey out of Amanda for going to a strange place for kids in show biz called "Comedy Camp".

Amanda and Jim are then joined by American country singer, Tim McGraw. (Sorry Tim fans' you only get a fleeting glimpse of him) and then we have the title credits over clips of Jim and his hilarious behaviour in the interview, he never lets us down not ever.

Check out the show here: