Deadline reports that Jim Carrey is currently in negotiations to star opposite Steve Carell in "Burt Wonderstone", the new magician comedy that features Carell as the title star. They have co-starred in "Bruce Almighty" and shared voicing co-starring credits on "Horton Hears A Who!" a few years back. A few months ago Jim made a cameo in "The Office" in the episode after Carell had left! It will be interesting to see them in new live-action comedy.

The television director Don Scardino (Law & Order, 30 Rock and Royal Pains) is set to direct New Line comedy. The Oscar-nominated writer/director Jason Reitman (Up In The Air, Thank You For Smoking) has been working on the script this summer. He is the fourth writer to get his hands on the script, which has already been in the hands of John Frances Daley and Jonathan Goldstein, as well as original scribbler Charles Kultgen. 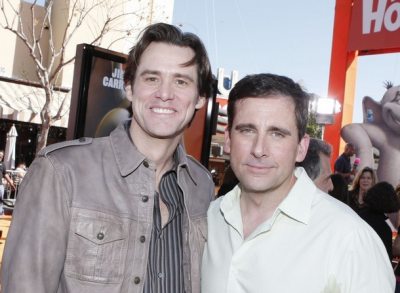 The story follows a Las Vegas magician who breaks up with his stage partner and finds himself upstaged by a younger, hipper illusionist. Jim's potential character in the film has not been revealed. A possible production start is early next year when Carell wraps up his role in "Great Hope Springs".

Check back for updates on this project.