Long before "Mr. Popper's Penguins" began principal photography in October 2010, the filmmakers began their search for the six penguins -Captain, Lovey, Bitey, Nimrod, Stinky and Loudy (so named for their distinctive traits) - to star alongside Jim Carrey. "We went all over the world to look for the right penguins," Davis recalls. While penguins have made appearances in movies before, never before have the birds held such a key role in a narrative film. "Audiences are going to see something they haven't seen before," says Davis.

"Mr. Popper's Penguins" enlisted Birds & Animals Unlimited, Hollywood's top animal trainers, to help find the birds. They, in turn, called upon Scott Drieschman, the respected penguin expert, to aid in the search. Having worked with penguins since 1972, first at Sea World and then as a consultant to zoos, aquariums, and oceanariums around the world, Drieschman has traveled to Antarctica numerous times to conduct research for the National Science Foundation. He describes his work's goal as "to establish breeding colonies in captivity from one zoo to another so that we have a stable penguin population." "Mr. Popper's Penguins" would be Drieschman's first foray into the movie business. 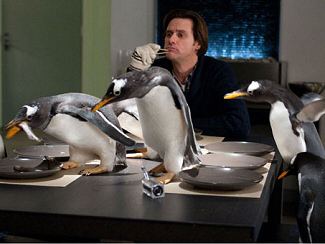 
"There are seventeen species of penguins," according to Drieschman, who finally decided upon Gentoo penguins for the film. "The Gentoos are the third largest of all the penguins, found in the sub-Antarctic and the Falkland Islands, South Georgia and South Chapman's." Ranging in size from about nineteen to twenty-two inches tall, the Gentoos are distinguished by the white stripes across their heads and by their bright orange feet.

Before the Gentoos were transported to the United States - and to movie stardom -a facility was built for them next to Steiner Studios in Brooklyn, New York, where some of the film was to be shot. The penguin production home included a living area, complete with swimming pool, and a training space, both built according to the specifications dictated by Drieschman and Birds & Animals. "What you do is you look at what they have in the wild," according to Drieschman, as he describes designing the Brooklyn penguin facility. "They're in a cold environment, sometimes very cold. They need a lot of water, and a clean living area."

Inside Steiner Studios, a mammoth air conditioning system was installed on the stage so the temperature could be maintained at 36-40 degrees Fahrenheit whenever the penguins were on camera. Drieschman himself moved into a trailer home next to the penguins' habitat, so the birds would be attended 24 hours a day, seven days a week. "The animals came first, exclusively," Drieschman attests.

When the penguins arrived in Brooklyn at the end of August, 2010, the trainers at Birds & Animals had their work cut out for them. "The penguins were pretty wild when we got them," says head trainer Larry Madrid, who has been working with animals for thirty years. "The first part of the training was getting to know them and getting them to eat food from us in a way that they were comfortable with. And then we went into a whole process of desensitization and sanctuary training and position reinforcement." 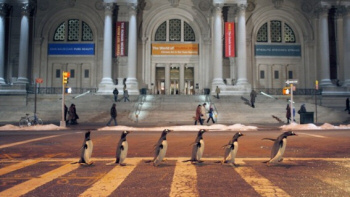 
"The trick was to get them to be calm and to give them places where they could go and feel safe," adds Drieschman. The trainers used a pen as a safe area and taught the birds to go to their mark, a crucial talent for any film actor. "Open the pen up, and the birds just walk out," Drieschman explains. "They know to go to the mark, get their food, and then just stand there. And they're going, 'this is good, this is good, we're happy.'"

After several weeks of training, but before filming began, the human cast members visited the Gentoos in their penguin habitat. "The actors would come over and see the penguins first, and get a feel for what they were like, and experience the cold temperature," says Madrid, who adds that Jim Carrey was particularly good with the penguins. "He was willing to feed them fish," says Madrid. "He's really funny, and it was neat to see him interact with them in his way. Jim was amazing with the penguins."

"Jim bonded instantly with the penguins," John Davis agrees. "And they responded really well. Jim was walking around and the penguins were following him. He loves these penguins. He gets up to them very close and he's comfortable in that situation. And they're comfortable."

While the crew worked in big jackets, gloves, and hats on the 40-degree set, the penguins always brought a warm feeling to anyone they were in contact with. "You cannot stand next to them and not smile," says Carla Gugino. "They're just such little forces of joy. And they work for fish!"

As lovable as the penguins were, their single-minded and relentless pursuit of fishy snacks sometimes made working with them a challenge. "I had no idea penguins were so difficult to train," says Carrey. "All they want is fish, so I carried fish around with me everywhere - in my pockets, shoes...everywhere." 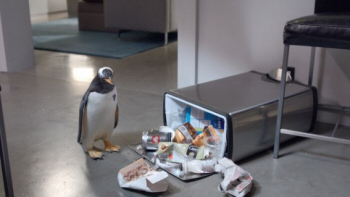 
"There's something great about live penguins, the barely controlled chaos that they bring," says Waters. In one scene, for example, in which Carrey's Mr. Popper sits the six penguins down for a "civilized" meal, the production team set the table so that before the cameras rolled the birds' food was covered. With Mr. Popper at the head of the table, and the penguins seated on chairs, three on either side, the idea was to uncover the food when Waters called "action," and the penguins would then simultaneously eat the sardines on their plates while Popper enjoyed his food.

"Of course as soon as we lifted the covers off, the penguins immediately leapt onto the table and started attacking each other's food and made complete mayhem," says Waters. "The great thing is that Jim didn't break character at all, and just casually kept eating very politely. And he was like, 'Could you pass the salt?' in the middle of it all."

"Working on that table scene was a highlight for me," Carrey recalls. "The wranglers were holding the penguins back, but all the penguins wanted to do was the attack the dinner plates full of sardines. I liked working with them because it was always spontaneous; you never knew what was going to happen. And the dinner table scene was no different. I mean, the penguins were absolute maniacs!" he adds with a laugh.

For scenes in which the penguins had to "act" by performing a very specific action, or when the filming location could not be made hospitable to the Antarctic birds, the production's visual effects team, led by VFX producer Blondel Aidoo and VFX supervisor Richard Hollander, took over. "We had this distinct opportunity of challenging the visual effects department by saying, 'we're going to shoot this movie with live penguins, and then you're going to have to make your visual effects penguins look as good as them,'" says Waters. 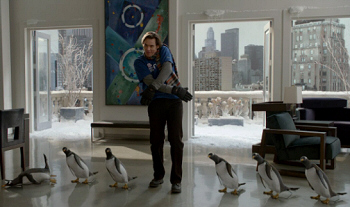 
Aidoo, who served as visual effects producer on "Enchanted" and "National Treasure," explains that the process of creating the CG birds began by looking at real Gentoos. "We took tons of photos of the actual live penguins doing what they do, including their actions and motions," he explains. "We studied the feathers of the penguins, which are actually amazing in the way the light hits them, and becomes iridescent across them. To recreate all of that in CG is quite a task."

"We actually brought in eighteen cameras on a circle, and they could all take a picture at the same time," adds Hollander, a senior visual effects supervisor at Rhythm & Hues, whose credits include "Titanic," "Blade Runner" and "Harry Potter and the Sorcerer's Stone." "They're all pointed at the center, we put quite a few penguins in there and we shot a lot of frames. We could see how the fat tissue and the feather tissue are moving from many different angles at a certain instant. We have cycles of walks, runs, turn, and funny wing movements. We look at the real animal as scientifically as we can and we go from there and build our CG creature."

Aidoo and Hollander blended their work seamlessly with the live action shot on the set. "We hope the visual effects just support the story line," says Hollander. "We want audiences to wonder, how the hell did they ever make all those real penguins do all that work?"